In this session we went over the definitions for things such as nouns, adjectives, etc. Followed by creating our own sentences, then re wording a couple of newspaper articles and finishing off with a few riddles to solve.

This sentence has an adverb, verb, noun and adjective.


'The little cat was jumping high.'
This sentence has a pronoun, verb, adverb, subjective personal pronoun and adjective.
'John was printing badly, it looked rubbish.'

This sentence has 3 nouns in it.


'Barry and his animal pals ran quickly into visual language to learn about nouns.'

For this task we were to take the article from a newspaper we were given and shorten it down to 140/160 characters.
The first one I did was this one: 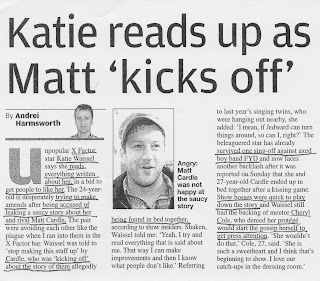 This one was to be shortened down to 140 characters, as though it was going to be posted in a 'tweet'.
Here is what I got, I managed to get it to exactly 140:
Katie off X Factor reads things written about her to get people to like her. She's making amends after a story of her and Matt being in bed.
The next article I did was this: 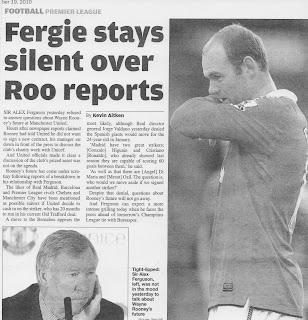 This one was to be shortened down to 160 characters, as though it was being sent out in a text message.
Here is what I got, I managed to get exactly 160 characters:
Sir Alex Ferguson refused to talk about Wayne Rooney saying he don't want to sign a new contract with United. It is rumored that Barcelona and Chelsea want him.
Riddles:
Six letters it contains, subtract one and twelve remain.
- dozen/s
I'm safe and secure, behead me I become a place of meeting, behead me again and I am the partner of ready, restore me and I become the domain of beasts.
- stable
How is it possible to always find what your looking for in the last place you look?
- because you stop looking after you find it.
A black dog is sleeping in the middle of a black road, no street lights, no moon. A car comes driving down the road with no headlights. How did the car know the dog was there?
- it was daylight.
It walks on 4 legs in the morning, 2 legs at noon and 3 legs in the evening. What is it?
- man.
Posted by Sarah Pritchard at 23:05

Email ThisBlogThis!Share to TwitterShare to FacebookShare to Pinterest
Labels: OUGD104